Brachycephalic obstructive airway syndrome (BOAS) is the term we use to describe upper airway breathing problems that are seen in some animals in the flatter faced breeds, including Pugs. BOAS occurs when the bones of the skull shorten but the soft tissue (palate, muscles, nasal tissues or turbinates and tongue) fail to similarly reduce in size.

As the site of obstruction can vary amongst dogs, the clinical signs or problems that the dogs have differs amongst individuals. The usual problems are struggling to exercise (exercise intolerance), noisy breathing, struggling to thermoregulate (keep cool) in warm weather, regurgitation of food and/or saliva and sleep disorders.

The noisy breathing usually gets worse when the dog is excited or exercising and there are two sounds we are listening for. The first is a lower pitched noise (or stertor) which is usually the soft palate vibrating because it is too long or because the nasal cavity is obstructed.

The second sound we are listening for is a higher pitched noise or stridor which is usually a sign that the larynx or voice box is collapsing due to high pressures when breathing in (think hosepipe with a large amount of suction applied). Laryngeal collapse is more common in pugs than in bulldogs or French bulldogs. Pug can also suffer from collapse of the trachea (windpipe) and main stem bronchi though we think this is often secondary to the upper airway obstructions.

Other signs of BOAS are using the abdominal muscles to breathe or the skin at the front of the chest (neck) moving when breathing.

We use the clinical signs to recognise the syndrome but we also add in an exercise tolerance test that is a 3 minute trot at 4mph. We listen to the upper airway before and after exercise and we use the presence and loudness of the breathing noises to grade the BOAS. We have grade 0, where there is no airway noise before or after exercise, grade 1 where there is noise but it is very quiet and only heard when listening through a stethoscope. Grade 2 dogs have noise that can be heard without a stethoscope but it is moderate and intermittent whilst grade 3 dogs have loud noise present most of the time. We consider grade 0 and 1 dogs as clinically unaffected as they have no or mild airway disease that should not impact their quality of life.

This is our grading scale that we use on all the dogs we examine. We think the exercise tolerance test is particularly important in pugs as some pugs (about 40% of the pugs that we see with airway disease) do not show any signs when they are completely quiet in the consult room. The exercise tolerance test is designed to increase the effort of breathing and show dogs that have the upper airway syndrome when they have a short period of exercise or stress. 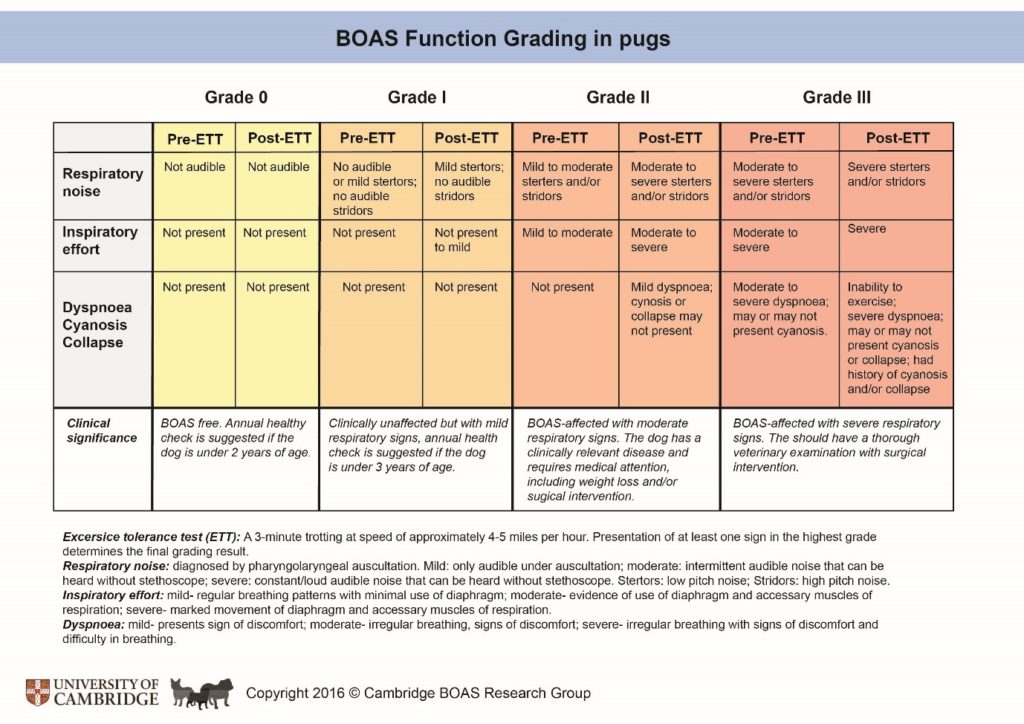 We usually advise waiting until dogs are 12 months of age before having them checked for BOAS as we developed our grading system on adult dogs and we are not sure if it will be accurate for puppies. If a puppy does develop signs of upper airway obstruction however it will usually get worse with disease. BOAS is a progressive disease so we recommend retesting dogs that are used for breeding yearly for the first few years until they are stable (usually around 5 years of age).

There are some risk factors that mean that a pug is more likely to develop BOAS over its life span. Interestingly, in pugs, females are more likely to be affected than males (in bulldogs and French bulldogs more males are affected). The main risk factors for developing BOAS are having closed nostrils and being overweight. There are some external conformational factors (shape of the head) that have a smaller effect on developing BOAS, in the pug these are having a wider head and having wide set eyes.

We have developed a grading system for nostrils to guide breeders which are the better nostrils for breathing. Grade 0 and 1 are not associated with a greater risk of airway disease whereas grade 3 (moderate stenosis) and grade 4 (severe stenosis) are linked to a fourfold increase in risk of developing BOAS. 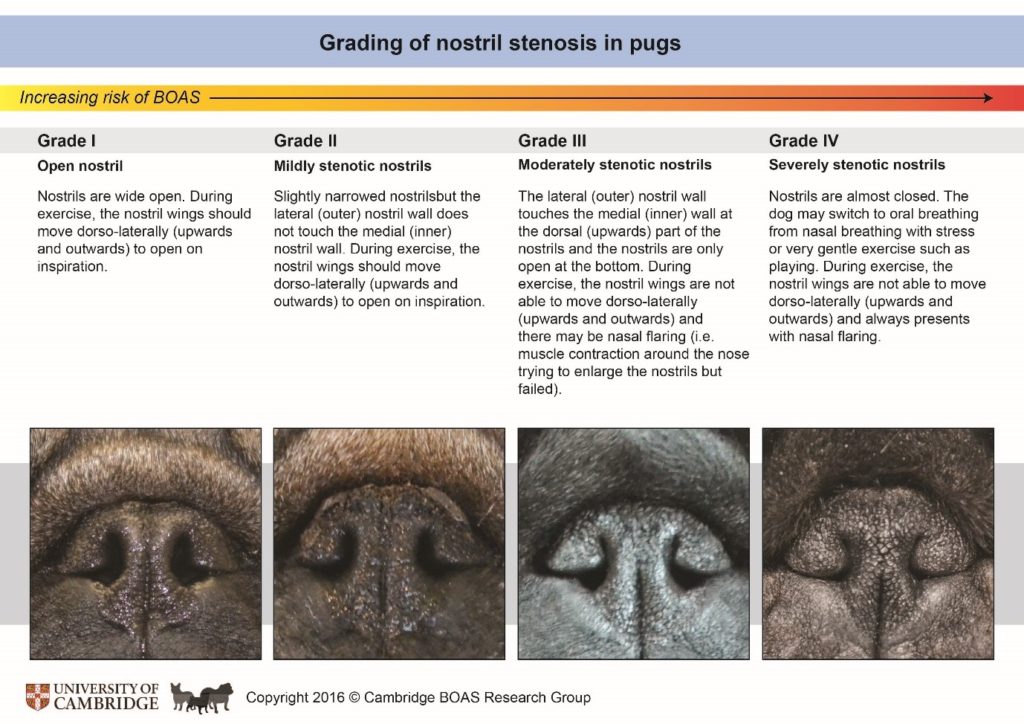 We would also encourage owners to keep their pugs at a moderate body condition score (weight) as being over body condition score 7 or above significantly increases the risk of BOAS. We have seen pugs where the airway disease has improved with weight loss. We think this is due to fat deposits in the neck resulting in further pressure and collapse on the trachea and larynx.

Pugs are difficult to assess for body condition score as they often have skin folds around the neck and upper chest which can be a little confusing. We would advise feeling the ribs at the caudal end of the chest cavity and looking for and abdominal tuck when viewing the dog from the side and a waist when looking down at the dog from the top.

In addition to keeping a pug at body condition score 4-6, we would also advise keeping it fit with regular exercise.

There is more information about BOAS on the Cambridge Website, including our publications.

The Kennel Club and the University of Cambridge have collaborated to create a Scheme that grades the respiratory function of Pugs, French Bulldogs and Bulldogs. This is known as RFG .This scheme was officially launched on Saturday 2nd February 2019 in Cambridge and is supported by vets, researchers, breeders and pet owners.

In the past BOAS grading as it was known was only available at Cambridge and occasionally at shows but appointments were very limited, now it is much more accessible as vets have been trained throughout the country and nobody should be too far away from a participating practise.

The formation of this panel of regionally approved assessors (vets) is a massive step forward and gives more owners the opportunity to find out if their dogs are affected by BOAS and also provides guidance to breeders on lowering the risk of producing affected puppies.

It is useful for the pet owner too because as well as helping source a puppy from healthy parents having your dog graded will help you make an informed decision if your usual vet is advocating surgery for a breathing issue. It appears to be common practice now for vets to carry out surgery to open nares (nostrils) and  do soft palette surgery on young Pugs at the time of neutering/spaying because it will save him/her from having to be done later, as all Pugs need it doing. This is despite owners not reporting any problems with breathing or exercise tolerance. BOAS grading was never advised for dogs under the age of 12 months of age and the new RFG scheme recommends that dogs are assessed from 12 months of age and then repeated every two years or until they are no longer used for breeding.

To progress on the Pug Breed Council Five Star Health Scheme a grading at 24 months or over is required.

Dedicated to providing reliable and authoritative Pug Health related information and protecting the breed for the future.